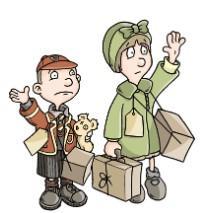 We have had a brilliant start to the year, learning all about life on the 'Home Front' during World War Two. We have looked at pictures, first hand accounts and other sources to find out about the varying accounts of evacuation during the war and used this to write our own postcards home. We have also looked at various propaganda and written our own guides to staying safe in the Blitz. Later in the unit we compared the experience of children in Britain with that of children elsewhere in the world by focusing on the story of Anne Frank.

We are looking forward to our trip to STEAM museum on the 4th October where we will find out more about air raid shelters and even experience an 'air raid' first hand!

Later in the term we will be learning all about forces in the world around us and carrying out scientific investigations to see what affects forces in action. Our English this term is centred around the book, 'Wonder' by R.G Palacio. We have looked at underlying themes in the book and asked questions such as 'What does it mean to be ordinary?' In our writing we have been debating whether Auggie should be home-schooled and learning the features of a discussion text. We will also be looking at character view point and learn how we can change perspective in narrative texts.

At the beginning of the week, it was Rosh Hashanah, Jewish New Year, and we investigated how this is celebrated. We reflected on how, in each culture or religion, there is always an opportunity to reflect on what has gone well over the past year and the possibility to do even better in the next, concluding that there is always a chance to make good.

In our topic lessons this week, we have been learning about the Holocaust and antisemitism. We have also learned about Anne Frank’s life and her legacy. We also listened to recordings of survivors of the camps.

In Guided Reading we have been discussing characters and their personalities, using evidence from the text to justify our opinions.

In English, we have been planning and writing a discussion text on whether the protagonist of Wonder, Auggie, should be home schooled.

1 000 000 (y5) and using inequality signs to compare numbers. The children have now been issued with their spelling frame log-ons.  We are looking forward to our trip to the Steam Museum next week, which will really bring our topic learning to life.

This has been a very significant week in our country’s history and we have spent time reflecting on the contribution the late Queen has made to the Country through her long reign. We have also been reflecting on how much our country has changed in so many ways through her lifetime. The children have impressed us with their reflection and general knowledge. In our topic lessons this week we have been learning about the Blitz and what life on the Home Front looked like. We have been examining original sources, including contemporary recordings by British and then, neutral reporters about the Blitz and watched a short film about how ‘London could take it’. We have been investigating rationing, using the Internet to research wartime recipes and subsequently planned meals for a family. We also have looked at how civilians took on extra roles during this difficult time and how the roles of women changed. In Guided Reading, we have been reading a biography of Nelson Mandela, to vary our reading diet. In English, we have been analysing the structural and linguistic features of discussion texts. In Maths we are extending our knowledge of numbers and the number system to 10 000 000 (y6), partitioning numbers and stating the values of each digit.

Osprey, Falcon & Kestrel This has been a busy week in 5/6 with lots of important elections happening. The children will be voting for their House Captains on Friday 16th September and for the Year 5 Youth Parliamentarian. It is great that we have had so many children stepping up, wanting to hold important roles in the school and wider community. In our topic lessons this week we have been learning about propaganda and the important role played by the Ministry of Information, which headed many campaigns to boost morale and to make people behave in certain ways during WW2. We have examined a range of posters and created our own war propaganda. In English, we have been debating whether children should have a greater say in what they learn and do in school before writing a cold task, examining the issues. In Guided Reading, we are reading Wonder and beginning to make inferences about the characters that Auggie meets when he first goes to school. This week we have held our first RE day. We considered the following key questions: how do we create a just and fair world? What do religions say about justice? We reflected on what we mean by fair and unfair and how we can make a difference. In Maths, we have now started our Maths groups and we are all working on place value and extending our knowledge of numbers and the number system. Again, we have been impressed by the children’s enthusiasm and engagement.

Osprey, Falcon & Kestrel The children have made an excellent start to the year and have come back full of enthusiasm for learning, which is great. It has been lovely to see the children’s happy faces, keen to get stuck into a new year of learning. For our first topic, our enquiry question is - what was life like for children during World War II? We have been impressed by the questions that the children have come up with. So far, we have looked at what led up to the outbreak of war. We have also started to look at evacuation and what it would be like to be sent far away from home. We are reading Wonder by R J Palacio, which tells the emotive story of Auggie, who wants to be treated like an ordinary boy, despite his appearance and disabilities. In English and Guided Reading we have been doing response writing, imagining what it would be like to be in Auggie’s shoes. A very well done to everyone on an extremely positive start to the year.

Unfortunately not the ones with chocolate chips.

Some cookies are necessary in order to make this website function correctly. These are set by default and whilst you can block or delete them by changing your browser settings, some functionality such as being able to log in to the website will not work if you do this. The necessary cookies set on this website are as follows:

Cookies that are not necessary to make the website work, but which enable additional functionality, can also be set. By default these cookies are disabled, but you can choose to enable them below: